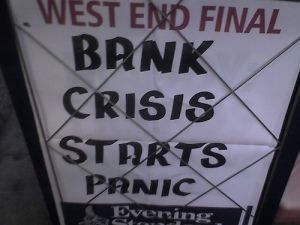 Oh the poor bankers.  It’s tragic that, after years of charging us to use our own money and then using the profits to give it all away to idiots who couldn’t afford to pay it back, they suddenly found themselves in something of a mire.  Now, they not only wanted to be bailed out, they actually expected it.  If nothing else, it may just concentrate the minds of banks who survive the current “crisis” on future business practices.  When I moved to Ireland ten years ago, I struggled to actually open a bank account at first.  When I enquired as to why it was so difficult to do so without umpteen references, I was told (in no uncertain terms) that it was because ‘there had been a history of money laundering’ in the country.  What, so every ‘foreign national’ (as RTÉ is fond of saying) is assumed to be a money launderer until proven innocent?  What sort of way is that to run a business?  When I was eventually accepted, I was asked how I wanted to pay my charges.  What charges?  You know, using an ATM, writing cheques, etc.  Now, I first opened a bank account in Scotland when I was eight years old, not once was I charged for withdrawing my own money; I was utterly appalled.  But then you look at their other practices and realise that banks simply aren’t cut out for competitive business in the modern era.  Wasting money by sending out junk mail to tell you how you qualify to borrow more money from them – what’s that all about?  Credit cards? Second and third credit cards?  Another well-known financial black hole they’re only too happy to invite you to join in.  100% mortgages?  That one certainly bit them and their customers savagely on the arse.

And then there’s the really infuriating practices that make me wonder why they’re still operating in the Dickensian era.  They are money shops and they should takes their responsibilites seriously in this regard.  “Bank” holidays – why?  They should be open the same as every other retailer who wants to stimulate their own enterprise.  Closing in the afternoon – why?  If they want to finish work at a reasonable hour, they shouldn’t expect any other services to be open for them when they leave work.  Same goes for late-night shopping on Thursdays and at Christmas – banks would actually do great business at this time as well as being convenient for other people who can’t get to the bank during the week.  Not open at weekends – why?  Because the stock exchange doesn’t ‘do’ weekends?  Ridiculous.  Banks – the world has changed since the time of Ebeneezer Scrooge and it’s high time your curmudgeonly managers and customer-facing sharp-end realised this.