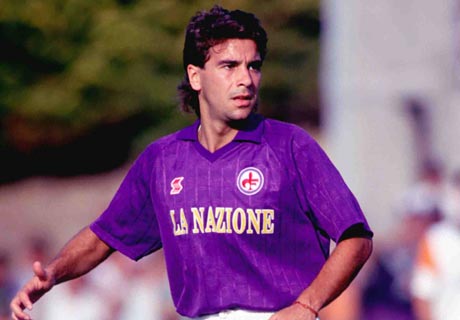 Former Fiorentina and Milan striker, Stefano Borgonovo, was awarded a benefit match between his two former clubs at Stadio Artemio Franchi in Florence this week.  The 44-year-old has been diagnosed with the motor neuron disease amyotrophic lateral sclerosis, the illness which claimed the life of former Genoa player Gianluca Signorini in 2002.  By way of tribute, many former stars of both clubs turned out in his honour.  It was particularly touching to see Viola heroes Giancarlo Antognoni, Gian Matteo Mareggini and Roberto Baggio back in the shirt, while amongst the glittering stars of Milan’s past were Franco Baresi, Daniele Massaro and Frank Rijkaard.

Capped three times for Italy, Borgonovo had the most successful season of his career with Fiorentina in season 1988-’89, where he scored 14 goals while playing alongside Roberto Baggio (who scored 15).