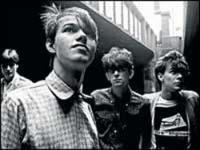 Christmas has come early to I Have Grave News.  The original line-up of the best Scottish group ever are to regroup to receive an award.  Orange Juice, whose later line-up split up following a benefit gig for the miners at London’s Brixton Academy in January 1985, are set to be honoured by Nordoff-Robbins Scotland, after frontman Edwyn Collins’ astonishing recovery from a brain haemorrhage.  Collins will appear with Steven Daly (drums), David McClymont (bass) and James Kirk (guitar) for the first time since 1982, the year they released the finest debut album of all time, You Can’t Hide Your Love Forever – which must surely now be set for a long overdue reissue.

When they emerged, Orange Juice were a fresh breath of pure-pop air, not only to someone like me who was keen to escape the trappings of teenybop hell, but to the whole Scots music scene and beyond.  Signed to would-be svengali Alan Horne’s label, Postcard (The Sound Of Young Scotland, also home to Aztec Camera, Josef K and The Go-Betweens), OJ were four young lads with raccoon hats, checked shirts and hearts full of soul.  Collins was described as the Scottish Cole Porter, a man whose iconic hairstyles and witty, ironic, self-deprecating lyrics about doomed romances would inspire devotion amongst an army of young men – preceding the “Morrissey effect” by some three years.

Orange Juice’s four, utterly treasurable, Postcard singles, ‘Falling And Laughing’, ‘Blue Boy’, ‘Simply Thrilled Honey’ and ‘Poor Old Soul’ sounded like nothing else around – and still don’t: scratchy punk with soulful vocals and disco basslines; they were all in the garage but looking at the stars.

Talking about the reformation, Edwyn said, “It’s all part of the renaissance of Orange Juice. I have fond memories of the band and am looking forward to seeing them all again.”

David said: “We really needed a level-headed manager but, if anything, Postcard founder Alan Horne was even crazier than we were. It took years for me to realise I’d been part of something so important musically. Now with the endorsement of Franz Ferdinand it’s almost come full circle.  It’s the end of a journey in a way. It’s amazing what he’s [Edwyn’s] achieved since his illness. That’s why it’s important for us to get together.”

Steven said: “Orange Juice set rolling a multi-million pound industry and completely reshaped Glasgow’s self image.  That wasn’t easy.  We were self aware enough to realise our records were making history.”

All roads lead to Glasgow next month, with a hope that a tour may be forthcoming.  Earlier this year, Edwyn Collins’ scheduled gig at The Village in Dublin was cancelled due to criminally poor ticket sales. 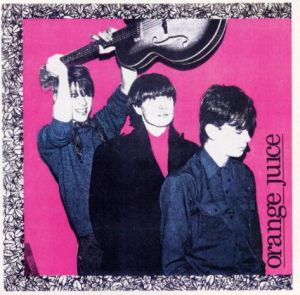