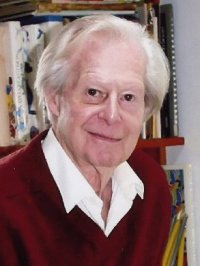 Another founding stone of my love for television passed away last weekend.  Tony Hart, gentleman, artist and one of the most pristine, softly-spoken examples to children’s TV presenters the world over, has left us at the age of 83.

I first fell under the spell of this wonderful man in the 1970s, on the slightly bizarre children’s arts programme, Vision On; it was some years before I realised that the reason the programme was presented in near-silence, and contained comedy mime routines by future Doctor Who, Sylvester McCoy, was that it was intended for the deaf.  The beauty of it, as with most experimental and educational shows of the ’60s and ’70s, was that is was always fascinating to all children, irrespective of their hearing.  Its most iconic item was The Gallery, a slow pan around a wall of selections from the flood of artwork sent in by young viewers every week; it was memorably soundtracked by the beautiful and quirky dittie, Left Bank Two, which was later to become a retro-lounge classic.

After Vision On ended in 1977, Tony returned the following year with Take Hart.  In this, he necessarily did far more talking, especially with the introduction of Plasticine stop-animation character Morph and, my favourite,  the anxious, manic janitor, Mr Bennett (whom I found particularly funny, for some reason, leading me to find anyone called “Mr Bennett” hilarious ever since).

Like Rolf Harris, Tony Hart had the innate ability to demystify the practice of art and thus make it accessible to people like me, who had no natural talent, but simply a love of holding a pencil and drawing for its own sake.  In one of his last interviews, he told The Times: “Time and again I have been told: ‘I can’t draw.’  My answer has always been the same: ‘If you can write, you can draw’.”

In fact, I still treasure my copy of his book, “You Can Draw”, a step-by-step guide to the basics, which helped me live out my unfulfillable ambition to be a cartoonist: my efforts, “Lamb Amirstan” and “Flobby Blobby People”, are classics only in the confines of my boxes of rubbish in the attic – so, yes, my namesake can rest easy in his grave too.

Tony Hart brought art into the lives and living rooms of millions of children like me; to all of us who grew up sketching, painting, cutting and pasting under his gentle guidance, he will be fondly remembered always.