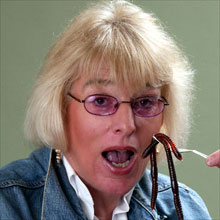 It had to happen, really; her mother is one of the most despised politicians in British history, her father was a much-lampooned, anti-socialist businessman  and her brother is a former rally driver, senza sense of direction, who was involved in an alleged coup plot in Equatorial Guinea.  It was only a matter of time before Carol was making controversial headlines for something other than her former exploits in Ant & Dec’s publicity jungle.

In true Duke Of Edinburgh or Mary O’Rourke fashion, she showed just how easily un-PC remarks can slip on to the tip of her tongue when she described a tennis player as ‘a golliwog’ during what her agent, Ali Gunn, described as “a private conversation” in the BBC green room following an edition of The One Show.  The BBC has removed Ms Thatcher from the show after she failed to make an unconditional apology for using the term, even though her comment was made off-air and was reported to the Corporation by an unnamed source.  The Daily Telegraph  yesterday reported that her remark referred to French player Jo-Wilfried Tsonga.  Ali Gunn said the BBC should apologise to her client for ‘condoning’ the leak of the private “joke”; she also said she would consider legal action against “anyone” who called Carol Thatcher a racist.

Well, obviously, IHGN is not calling her any such thing; however, there is certainly a long-standing and common opinion that words and terms such as “golliwog”, as well as Mary O’Rourke’s “worked like blacks” are unacceptable and outdated due to their racial connotations.  It makes no difference how many times (C)conservative or reactionary commentators describe their removal from common usage as “PC gone mad”, these are abusive terms which are likely to cause offence and as such, in any form of regular employment, could, and ordinarily would, lead to disciplinary action or dismissal.

Carol Thatcher needs to ask herself, and answer honestly, why on earth a term like that should come so quickly to mind, particularly when she was employed by the BBC, an institution her parents both felt was left-wing and biased against the Thatcher government.  However, for the rest of us, it all adds to the ongoing sitcom of the Thatcher family; like a more serious version of Blackadder, it’s just a new generation’s turn to make people either reel back in horror or chortle up their sleeves.