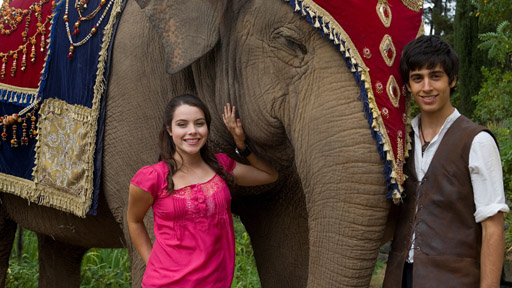 The Elephant Princess.  Seriously, just how unrealistic can a children’s television programme get?  I’ve no problem with the basic premise: that this young, suburban Australian lass, Alexandra Wilson, who’s in a band and dreams of rock stardom, suddenly discovers that she’s Princess of this mystical kingdom called Manjipoor when she’s visited by this lad called Kuru and his magical elephant called Anala, both of whom then have to help her to master these new magical powers she’s acquired, as well as time-manage her with all her band goings on and the sheer unadulterated hell of being an Australian teenager.  No problem with all that at all.

It’s the ludicrous scene I just watched of her band’s rehearsal I have major difficulty suspending my disbelief over.  Her and two other band mates watched, with gormless, endlessly patient smiles all over their faces, as the band’s drummer played a lengthy drum solo.  I mean, not one of them looked as if the thought of twatting him over the head with a guitar and ramming his sticks up his nostrils had even passed through their heads.  We can’t let children be exposed to this sort of far-fetched nonsense.  Bring back The Monkees.

4 thoughts on “A Mammoth Load Of Rubbish”