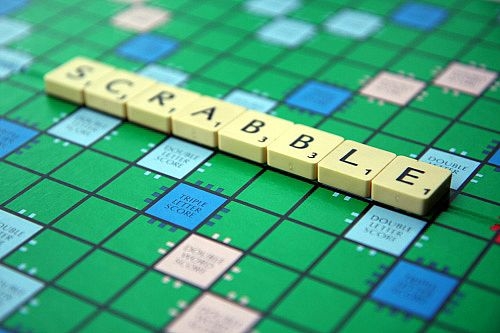 The world of ‘rules’ is in mourning tonight, after Mattel announced that the forthcoming new edition of Scrabble will make proper nouns acceptable.

According to a ‘spokesperson’, “this is one of a number of twists and challenges included that we believe existing fans will enjoy and will also enable younger fans and families to get involved.”  In other words, the thickest members of society will now get one from Santa and not feel entirely excluded – especially now that Burberry, Kappa, Liverpool, Coldplay, Shoxx, Parkhead, Carlsberg, McDonalds and Hollyoaks are about to become potentially high-scoring options.

This is beyond depressing. The next logical step downwards and backwards will no doubt be the introduction of “txt spk” or, even worse, awarding consolation points for “almost right” (or “wrong”, as it used to be known).  People who already speak and spell in approximations will be delighted by this development, of course, and are no doubt already looking forward to next year’s “Simply Grunt & Point” edition, which will come with the words already printed on to the board, along with a wee button which, when pressed, will emit a lengthy round of applause.

One thought on “Scrabble: now available in “moron””