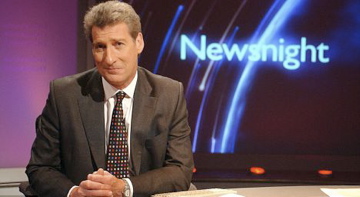 Why do I love Jeremy Paxman?  Let me count the ways.

He’s fiercely intelligent.  He’s fiercely articulate.  He’s fiercely bad tempered at times.  He presents two of my favourite programmes, Newsnight and University Challenge.  On the former, he’s the scourge of most politicians and spokespeople for (self) interest groups, which always makes for delightful viewing; on the latter, where he is currently the longest-serving quiz master on British television, he’s a bit more respectful to the students, but tends to become impatient when waiting for an answer: “Come ON!”

He was the subject of one of the best editions of BBC2’s Who Do You Think You Are?, in which he discovered his maternal great-great grandfather was a Scot, serviceman John McKay, who married Mary Nicholas in Glasgow.   Jeremy’s investigations revealed that John died in 1894, leaving Mary a widow with nine children.  As she didn’t receive his army pension, and had no other means to support her family, she was forced to seek poor relief – but her application was rejected following an anonymous letter telling the authorities she had an illegitimate child.  Upon discovering this, Jeremy was speechless with rage.   When he later visited the abandoned tenement where she brought up her children in squalor, he was reduced to tears.

But my favourite Paxman moments were always on Newsnight.  He famously pressed former Home Secretary Michael Howard for a single answer a total of twelves times within a three-minute period in 1997 – and as a lifelong ‘fan’ of Michael Howard, I never tire of watching that.  Then, in 2005, he reacted in typically disdainful fashion when the programme’s producers decided to swap a closing round-up of financial news for a brief weather forecast.  The results, seen below from Have I Got News For You, were little short of hilarious.  The weather reports were ended after the first week, as Paxman himself explains here.

And, just because I love him so much, here he is being particularly grumpy at yet more inanity.

The world would indeed be a poorer place without Jeremy Paxman.