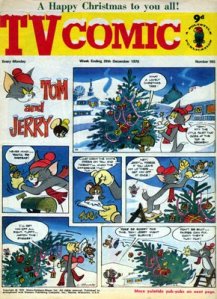 TV Comic was the first proper weekly magazine I collected.  I could barely contain my juvenile excitement between issues.  It would pop through my letter box on a Thursday, even though, somewhat frustratingly, it had “Every Monday” printed under the banner – such were the trials of Scottish village life in the mid-1970s.  TV Comic pandered to practically all my favourite things on TV, as well as a few I had no idea existed.  It had a natural BBC slant, in as much as most of the cartoon strips in it were based on programmes shown on the BBC, whether home-produced or imported.  The first copy I remember owning was bought for me by one of my great grandmothers.  It was a fine summer’s day (I’m not just saying that because I was 5, it really was sunny), and we sat on a bench in Kirktonhall Glen, the local public park, while I peppered her with questions about its contents:  “What does that say?  What does that mean?  What is that?”

It started with a Tom and Jerry strip on the front, one which concluded on the back – good for a chortle but nowhere near as funny as the actual cartoons.  Inside, there were strips of other cartoons too, like Roobarb and Barney Bear – although, I confess, I don’t recall ever seeing a Barney Bear TV cartoon in my puff.

Bizarrely for a child’s magazine, it had also had strips of more adult-orientated programmes like Dad’s Army and, most peculiarly, Cannon, an American drama series (a good old Quinn Martin production) about an overweight private detective, played by William Conrad (later to appear as guess-which-one in Jake and the Fatman).  I’m not sure I ever read those, although that’s partly why I regret that I donated all my copies to the local doctor’s surgery.

Another reason for such regret was that there was a Doctor Who serial strip near the back of the magazine – this was what made it an absolute must-read-before-school-and-discuss-with-classmates.  Tom Baker was the incumbent Doctor at the time, easily the most popular Doctor of the original series, and I well remember the excitement of those final-box cliff-hangers, especially when the programme had finished for the summer.  “Interestingly” enough, all was not lost to the doctor’s surgery waiting room: most, if not all, of TV Comic’s Doctor Who strips were reprinted during the 1990s in the Marvel publication Doctor Who Classic Comics – I actually collected all of those too.  See, good things come to those who wait, patiently, with a carrier bag.  Blimey, it’s hot inside this old parka.

I received deliveries of TV Comic for about two years – not long by the standards of a man in his forties, but it was an age when I was a child.  And with age came more exciting magazines.

2 thoughts on “A life in magazines: TV Comic”