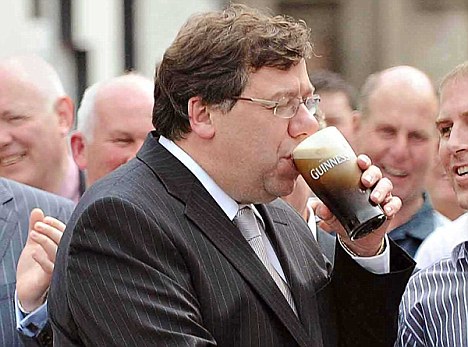 A doffed hat and little bow to Irish Times’ reader Michael McEvaney, who had this excellent letter published in today’s paper:

Madam, – Happy Arthur’s Day, our annual celebration of Guinness’s stranglehold on the Irish brewing industry for the past 50 years or more, a stranglehold that means Ireland is the only beer-drinking country in the world where nearly every one of its thousands of pubs have the same handful of flavourless, mass-produced beers.

Devotees of Guinness’s stout refer to it regularly as the “real” thing: how something that’s churned out by the lorryload with preservatives and pasteurisation can be called the real thing is beyond the understanding of this particular beer drinker.

Real beer must be microbrewed – chemical-free in small batches, as is standard practice in other countries. This process allows the flavours to develop and emerge. These days there are several small, independent breweries, both in and outside Dublin, brewing stout and other beers in this fashion – in other words, brewing the “real” thing, and that’s what this particular beer-drinker will be celebrating this Arthur’s Day.

For the life of me, I’ve never worked out how a nation famed worldwide for its ability to put away drink puts up with the spectacular lack of choice available.  As Mr McEvaney says, there only are a handful of the same flavourless beers in almost every pub, ones people are apparently happy to drink by the pint until they fall over.  One must therefore conclude that people drink them only to get drunk – it’s certainly not for reasons of palate or discernment.

For this reason, I find the whole concept of alcohol sponsorship of sport and music events deeply, deeply worrying.  I hear constant criticism of the junkies who menace the streets of Dublin, but what of the drunks?  Are they not responsible for most of the mess around city centre each and every weekend?  The spates of fights and random attacks?  The al fresco pissing contests?  The assault courses of pebbledashed pavement puddles?  And, like any other litterers, they expect someone else to come along and clean up after them.  Not occasionally, but every week in life.

A few years ago, I grew heartily sick of alcohol-sponsored music festivals, particularly where every other tap and choice were off except for the named brand – especially when it was that astonishingly poor beer favoured by oil-capped American car mechanics and advertised, for some reason, by lots of paddling horses and a voiceover man with asthma.  I assumed these were the prices we paid (and by God, multinationals know how to charge for alcoholic water) for economic ‘success’, a steady round-robin of events to celebrate three separate brands of juice for drunks.

Last year’s Arthur’s Day should have been a one-off, a genuine landmark celebration.  Never mind strapping on some musical acts to pretend it’s an actual festival, to turn it into an annual event, where the intention is that thousands of pints are bought simultaneously, is commercial opportunism at its most crass.  And thousands are viewing it with extraordinary enthusiasm not a fortnight since the leader of this nation was lambasted for supposedly being drunk or hungover during a radio interview, and many gullible parents then allowed their schoolchildren to go out drinking and fall around the streets to celebrate receiving their exam results only two nights later.  Are the rest of Europe not staring at us in utter bewilderment?  Have we no shame whatsoever?

Guinness is, without doubt, one of our heritage brands and, to a certain extent, something we can all be proud of.  It’s something which will continue to bring tourists here – and God knows, we need them.  However, turning its creator’s anniversary into a pathetic non-‘event’, on some nebulous date each year, only serves to cheapen the brand and further reinforce negative stereotypes about the ways in which we show the world how to have “fun”.  It’s just what we needed – an alcohol-soaked Hallmark holiday, only far, far more expensive than any Valentine or Mother’s Day card.

I am still hugely angry about the way the publicans of Ireland dismissed Michael McDowell’s café-bar proposals out of hand, and then turned on the poor-mouth when the smoking ban apparently hit their businesses, before boring us all to tears with their pathetic, unfunny ‘go to the pub’ adverts – well, tough shit, publicans, you can’t have it all your own way.  I love how we’re urged to ‘drink sensibly’ while having the brand shoved down our throats at every available opportunity, like every time we pick up a newspaper or magazine, or switch on our TV or radio.

3 thoughts on “Arthur and the nights around the pub table”