It is that time of year.  The air has turned chill and crisp, the leaves brown, orange and scarlet.  The time of overcoats, scarves, gloves and mystery, when I feel the overwhelming impulse to listen to the very bleakest Scott Walker and read ghost stories.  It’s also the time when I feel like spend chilly afternoons wandering around cemeteries.

As the title of this blog suggests, I love cemeteries, graves, tombs and all the paraphernalia of death.  Growing up reading Poe and MR James, it’s hardly surprising.  I’m drawn to all things Hammer and there’s little more enthralling than a graveyard scene in any novel, even those which don’t involve the supernatural; the opening of The Woman In White by Wilkie Collins being one of the finest examples.

Cemeteries are amongst the few places I can become properly lost in thought.  There is a peace and tranquility within their walls which is unlike any other, and one that encourages wandering rather than sitting in contemplation.

I can’t put it any better than Morrissey when he sang: “All those people, all those lives, where are they now?”

I’ve always found human reverence for death and the dead fascinating.  The way we bury our dead, create small tributes to them and place a permanent record of their existence to visit and revisit for present and future generations.  When we’re not being murderous and destroying the planet, we really are quite amazing. 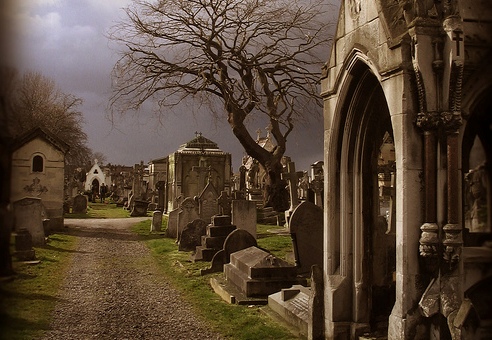 English country churchyards are my favourite.  It’s impossible to wander around one without recalling one or two favourite MR James ghost stories.  With their lychgates often left unlocked, they’re inviting and yet forbidding; the strange beauty of entering a churchyard and passing among the graves is tempered with the suspicion that you may be trespassing or incurring the disapproval of some unseen person within the church.  With the idea that you’re being watched, there’s always the worry that you’ll turn around and come face to face with The Woman In Black. 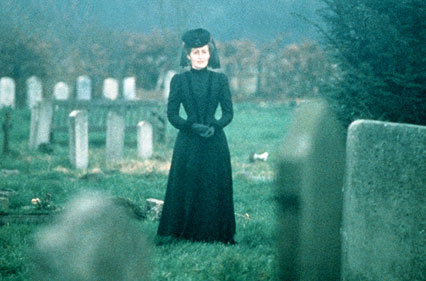 I do wish lychgates were more widespread.  Even the word itself, derived from the old English lic meaning ‘corpse’, conjures enough spooky connotations for a thousand Halloweens.

My favourite cemetery is probably Kensal Green, which was a neighbour to me when I first moved to London.  Before lack of money forced me into employment, I spent hours milling around its magnificent, spooky vastness.  I was always choosy about the weather for my visits too; I would only go on particularly dreary or cold days.  I filled notebooks of future ghost story ideas, ideas which I’m only getting to now, some 21 years later.  One such idea has grown into a novel, one whose opening scene has now lived in my head for two decades.  These things take time.

I’m in story mode right now.  My comfort book, appropriately enough, is Susan Hill’s The Woman In Black.  I only need to pick it up and head for a few of my favourite paragraphs, and I’m automatically inspired.  I’ve just finished Hill’s latest ghost story, The Small Hand, and quite brilliant it is too.  Susan Hill is the only author I’ve ever written to as fan; she wrote back to me too.  I should point out, I was in my late 30s at the time, not the late teenager I was when I first read The Woman In Black.  Oh well, a fan letter’s a fan letter, after all.

OK, I’m off to write.  Autumn and the onset of winter are upon me, and I have several tales to tell.

6 thoughts on “These are Grave times…”