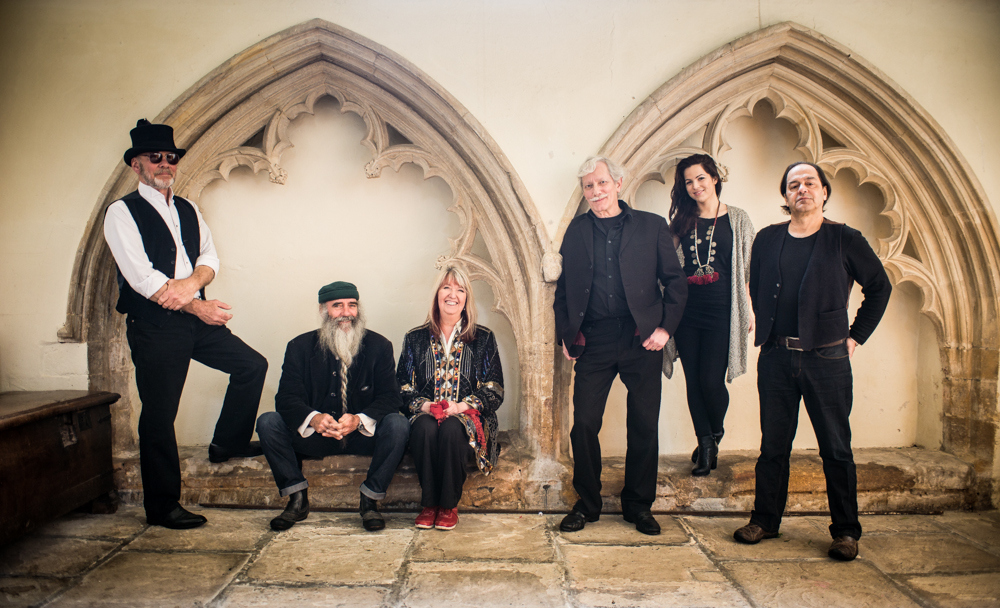 Old school indie fans will know that any animated pub discussion about The Fall inevitably degenerates into reminiscence about that band’s almost innumerable personnel changes – the legendary whipping boys and girls who did their best before falling foul of Mark E. Smith’s iron thumb, and which particular line-up was the best.

A similar discourse could easily be undertaken among folk aficionados about English stalwarts Steeleye Span, who are celebrating their 45th anniversary with a couple of Irish dates. Since their inception in 1969, Steeleye’s membership has been graced with a succession of musicians who themselves have become part of folklore: Fairport Convention’s Ashley Hutchings, The Pogues’ Terry Woods and influential English folk revivalists Tim Hart and Martin Carthy, to name a few of their alumni.

Singer, founder member and virtuoso spoons-player Maddy Prior may not quite be Steeleye Span’s answer to Mark E. Smith – she had some time out from the band herself between 1997 and 2002 – but her sweet-tonsilled contribution to the best of the electric-folk band’s many and varied artworks make her the closest thing they have to a mainstay. ‘Steeleye Span is like a bus,’ she once explained. ‘It goes along, and people get on and get off it. Sometimes the bus goes along the route you want to go, and sometimes it turns off, so you get off.’

In many ways, the anniversary is just another milestone for Steeleye, as they have an album to promote. Released last year, their 22nd LP Wintersmith is based on Terry Pratchett’s ‘Tiffany Aching’ series of Discworld books, proving that even 45 years on, they’re still looking for unusual sources of inspiration.

“A lot of this set will be from Wintersmith,” Prior says in warm Lancastrian tones, “and the rest will be from our catalogue – which is very difficult to choose, because we have such a vast catalogue! Everyone has their favourite album, so we can’t please everyone, but we do try and pick songs we think people will know.”

It is indeed vast. Stretching back to 1970’s Hark! The Village Wait, they had released ten albums by 1977, ploughing through a weird and wonderful combination of traditional songs, originals, covers and other folk oddities. Perhaps most spookily among them were their various musical adaptations of the Child Ballads, a series of dark and often macabre English and Scottish rhymes collected by Francis James Child during the 19th century. Prior credits former member Bob Johnson with bringing in the ballads, which became some of the band’s best known songs – ‘Thomas the Rhymer’, ‘Alison Gross’ and ‘Long Lankin’ among them.

“The ballads are the big thing with Steeleye,” she says. “Bob put tunes and arrangements to them and we’d all sit and work them out together”. The beguiling ‘Alison Gross’, from their marvellous 1973 album Parcel of Rogues, deals with an ugly evil witch who transforms the narrator, who spurned her affections, into a worm – fun, but dark stuff. “And we had one of those magic moments where the queen met us and praised us for what she said were (Prior adopts regal voice) ‘such jolly tunes!’”

As a folk band with electric guitars, quite a novelty back in the early 1970s, Prior says they were spared the ire of purists – unlike Dylan – by having Martin Carthy in the band, who she says carried with him a certain folk gravitas. “Some people weren’t going to like what we did anyway but we always ploughed our own furrow”, she says, citing ‘brilliant’ contemporary 11-piece band Bellowhead, who have similarly divided the folk fraternity. “We did things in a way we thought would allow people to hear the songs better – and it became our sound, for better or worse”.

Anyone with purely rudimentary knowledge of the band will probably know that they scored a top ten hit in 1975 with their ridiculously jolly take on traditional song ‘All Around My Hat’, a tune Prior says is “the one song the band all know and agree we have to play – it’s our signature, really”.

The band were eight albums into their career before they suddenly became household names. “The problem was, we weren’t commercially savvy”, she says, singling out their delightfully odd mediaeval Christmas carol ‘Gaudete’ as proof. “Even our A&R department couldn’t come up with that one! We weren’t against being popular but we had to work so hard. We had a deal with the record company for ten albums in five years, which would be unthinkable now. And I think it can be safely said that we became somewhat cavalier with the recording process… that period has some really strong material and some which is not quite up to scratch”.

For Prior, early albums like Below The Salt, Commoners Crown and Parcel of Rogues are a particular source of pride, despite how quickly they were recorded. “That was one of the reasons we split for a while, working under that kind of pressure. We couldn’t just take a couple of years off, which is what bands do now, because the worry was that everyone would forget about you. And, you know, we’d had enough of each other!”

However, Prior has never really had to lean on Steeleye to keep working, having always been prolific as a solo artist and collaborator with such luminaries as Tim Hart (pre-Steeleye), Martin Carthy (post-Steeleye), June Tabor (as The Silly Sisters) and also the fabulous Carnival Band. “I always seem to stagger and lurch from one thing to another. I use to listen to Bob [Johnson] doing interviews and I was always amazed that he seemed to have a plan – I never had a plan! ‘All Around My Hat’ got us on Top of the Pops, and that took us in different directions. The process isn’t something you can control.”

In 2014, that distinctive voice is still incredible to experience. Does touring and playing live still hold the same appeal? “Oh, of course”, she says. “There’s nothing like adrenalin to get you going. I used to be absolutely terrified going onstage, but at least I don’t have that any more”.

Looking forward to the Irish gigs, Maddy says the band’s energy is high but there is a little frisson of the unknown, with young fiddle player Jessie May Smart recently replacing long-time Steeleye member Peter Knight, who left last year. Refreshing the line-up may be part of the reason why Steeleye are not only still recording, but finding new sources of inspiration. Prior agrees. “It’ll be interesting to see how it goes with the new member but we’ve always been quite a powerful band. The material fromWintersmith is quite heavy and we’re still doing a couple of those dark ballads. It’s powerful stuff. I suppose that’s the thing with us – there’s nothing sweet about Steeleye”.