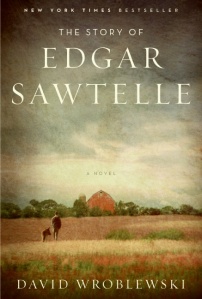 Debut novelist David Wroblewski spent ten years crafting The Story Of Edgar Sawtelle and it was worth every minute of his time. It is a giant and captivating work of old-fashioned storytelling, a family saga based around a child’s deep love and understanding of man’s trusty canine friend.

The story takes place in a small Wisconsin town where Gar Sawtelle and his wife Trudy train their own unusually intelligent breed of dogs, Sawtelles.

After a string of miscarriages, Trudy eventually gives birth to Edgar, an otherwise healthy child who cannot make any sounds, but who develops an immediate and almost telepathic relationship with Almondine, one of the female Sawtelles.

In an especially moving early scene, the dog awakes in the night, knowing instinctively that the baby is in distress, and wakes the oblivious Trudy from her sleep.

From this point forward, boy and dog become almost inseparable soulmates. Wroblewski imbues the novel with a rare and beautiful insight into the lives of dogs and the unspoken love between animal and owner; page after page of beautiful prose leads us through their training techniques, the dogs’ innermost thoughts, feelings and even Almondine’s dreams.

Like the humans in this tale, the dogs are fully realised, multi-dimensional characters, and far more than mere devices to carry along the emotional development of the plot.

The peaceful countryside farm setting changes dramatically with the return of Gar’s brother, Claude, who had left the family seat in mysterious circumstances some years earlier. With echoes of Cain and Abel and Hamlet, Gar soon meets an untimely end in the midst of an argument.

In an intensely emotional and terrifying scene, his ghost appears to Edgar during a terrible storm, after which the boy is convinced his father was murdered by his uncle.

As Claude takes control of the family business and wins Trudy’s heart, the distraught Edgar retreats from everything he knows and loves, including Almondine, to plot his revenge.

After a disastrous attempt to exact justice, Edgar flees into the Wisconsin wilderness with three young dogs, beginning an incredible adventure which is, by turns, harrowing, thrilling and shrouded in mysticism.

Yet even the most far-fetched supernatural elements of the young gang’s plight are brought vividly into the realms of credibility by Wroblewski’s stunning descriptive prose and his realisation of Edgar’s formidable, heroic heart and spirit. But Disney this is not.

When it becomes clear that Edgar must go back home (having learned the hard lesson that, “life was a swarm of accidents waiting in the treetops, descending upon any living thing that passed, ready to eat them alive”), the reader should brace themselves for a furious, shocking and stormy finale.

It unfolds, at a thundering speed, to a conclusion that is best read through gaps in interlocked fingers.

At over 500 pages, The Story Of Edgar Sawtelle is a lengthy but incredible journey that seems to have everything going for it; the beauty and flair of a great literary novel, the scale and pacing of a fantasy epic, and the absorbing thrill-ride of any glorious rites-of-passage adventure from our collective childhoods.

Wroblewski’s love for his subjects – in particular dogs and the bewitching Wisconsin swamps and forests – shines through in every sentence, rendering each new page more thrilling than the last.

For a debut novelist, he has hit the literary jackpot; for the reader, this is a sumptuous and rewarding experience.

2 thoughts on “The Story of Edgar Sawtelle by David Wroblewski”