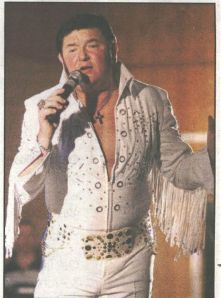 As we motor towards the summer silly season, our thoughts turn inexorably towards amateur entertainment.  We still can’t get enough of it, it seems.  It’s been no time at all since our media’s ironists had their hearts broken by Jedward’s inability to win Z-Factor – but, thanks to Vanilla Ice, Abrakebabra and Shake ‘n’ Vac, the terrible twins’ fans have ultimately got all they could have expected.   As someone who’s been an ironist all my life (and I do have a Jedward poster by my desk, proudly, because my 6-year-old rejected it), I really hate to be a cynic.  But desperate times call for renewed exasperation, as our irony comes back and bites every one of us on the arse.  We are utterly stuck with amateurism as the default form of entertainment, now that the borders of our discernment have become blurred, uncertain and disputed.  We now suffer from a chronic inability to separate actual talent from plucky “local” entertainment.

The gentleman you see above is a case in point.  His name is Greg Traynor, he’s from Bray.  Do you know him?  You should.  He is, believe it or not, “Ireland’s Number One Entertainer”.  He earned this title at the recent Irish Entertainment Awards in Athlone.  You weren’t there?  You didn’t join in the glamour and the glitz?  You didn’t appear in your finery on the pages of Social & Personal?

Well, he’s the real deal, they say, and the only mystery is why he hasn’t yet received a five-album record deal, a cover story in VIP, and his own Saturday night chat show on TV3.  However, the biggest shock of all is that he’s not the best Elvis impersonator we have in Ireland.

No, that honour falls to Tom Gilson, 39, who won the national Elvis lookalike/soundalike final in Bundoran last year.  He will be Ireland’s official entry in the Elvis World Cup, to be held in Cardiff this July.  And, as the ash cloud will probably scupper flights to the UK, you can be sure an Elvis knees-up or two will become quite a habit on those nice sailings to Holyhead.

I must confess, I haven’t seen Gilson do his thing.  He may be excellent, for all I know.  I just hope he actually is like Elvis, and not just another sad, fat sloth who is led to believe that pub karaoke should, by law, be televised.  My prayer is that he will be of the Elvis ’56 ilk, a true rock ‘n roll star, but I’m not hopeful.  Most Elvis “impersonators” go for the Vegas era; the clapped-out, drug-addled, fried sandwich and burger-binge near-death period, and this is mainly because most Elvis impersonators are clapped-out non-entertainers whose girths suggest they’re no strangers to the burger bar themselves.

Apart, that is, from the relatively slender Al Pacino look-alike Elvis who entertained us at a friend’s birthday party in an Italian restaurant in Streatham, south London, some years back.  Of course, he was terrible, but that seemed to be the point.  Mr Presley (Sir) wanted to serenade a female member of our party with a song of her choice; she chose ‘Surrender’, which made The ‘king King panic immediately.  Cue authentic sweat, as his one-synth-fits-all musical partner struggled through the chords and my friend helped ‘Elvis’ out with the lyrics.  It was a more gruesome experience than anything in Scarface.