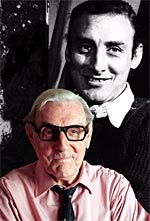 I was overjoyed yesterday to read that Eric Sykes was celebrating his 87th birthday.  This is marvellous news because it means, of course, that he’s not dead.  Like Norman Wisdom and Leslie “I say, ding dong!” Phillips, I can never remember if Sykes is alive or dead half the time.  It’s a shame that such great comic talents fade away, their humour no longer required by modern audiences – especially when those audiences are laughing themselves into incontinence at mirth-free acts such as Michael McIntyre, Flight of the Conchords and The (allegedly) Mighty Boosh.

I haven’t heard anything about Sykes since his great friend Spike Milligan died in 2002.  At the time, I was reminded of a marvellous anecdote: it seems that Milligan and Sykes had, in their old age, collaborated on a pilot for an intended sit-com, and mailed it off to the BBC more in expectation than hope.  Unfortunately, it was rejected almost immediately.  The script was returned to them bearing a post-it note, upon which was written one word: “Unfunny.”

Milligan took this rather personally.  “Unfunny?” he ranted.  “Have they seen Don’t Forget Your Toothbrush?  Auschwitz was funnier.”