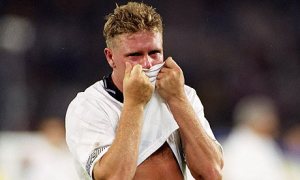 So there I was, working behind the counter in the Selfridges, Oxford Street branch of Our Price in the summer of 1990, filing away titles from our large selection of VHS tapes, when a well-to-do middle-aged lady gingerly approached the counter.

“I say,” she announced, by way of introduction.  “Do you have any Gezza videos?”

Being Scottish, and finding upper middle-class English accents repellent, I took a deliberate few seconds to process her question.  But I knew what she was after.  Gascoigne was everywhere.  Yes, he was a skillful (bordering on genius) footballer but his fame and infamy had spread into English pub and playground folklore because the chubby little Newcastle lad had burst out crying on the field during the 1990 World Cup semi-final in Italy after receiving a yellow card.

“Oh, you mean Paul Gascoigne?” I said.  “No, I’m afraid there’s nothing available at the moment.”

Ah, the golden age of VHS.  Even in the dark days before instant information, the public imagination about the possibilities and probabilities of video tape ran riot.  They automatically assumed that a video of any world event would be available in any shop, mere minutes after it had happened.  In fairness, a lot of very cheap and nasty football videos were produced around Italia 90.  I actually bought one: Italy – The World Cup Story.  Full to brimming with appalling voiceovers, a total lack of licenced footage and the final time I ever saw Roberto Baggio referred to as a Fiorentina player.  I watched it almost once.

I suggested to the upper-crust woman in Selfridges that, if it was cheap, pointless, quickly-produced tat in honour of England’s latest shit-for-brains hero she was after, she need only cross the road to the tacky souvenir stall, where she would discover a t-shirt bearing a photograph of “Gezza” (see above), under which was printed the tiresome old slogan “There Will Always Be An England”.  An attention-seeking, unintelligible footballer, bawling and blubbing into his shirt as an English icon?  What happened to the old traditional bulldog, I wondered?  The stiff upper lip?  Was this Geordie lad in mid tantrum really the fabled Best of British?

As I write, I’m back in London for a short break.  England have just been ejected from the World Cup and the shops are full of unsold, England-branded tat.  Tiny party hats, giant wigs, noses, flags, bags, wallets, badges, face paints, aprons and, of course, the ubiquitous, perennial t-shirts, anything that you can conceivably sell in white with a red cross on it is still clogging up all types of retail outlet, who are now counting the cost of stocking up on a wave of pointless jingoism.  It’s not so much The English team’s dumping from the World Cup that’s the problem, it’s the manner of their ejection – if the players couldn’t look arsed to do well, who wants to go around being branded as proud of them?

One of the worst affected stores, it would seem, is Marks & Spencer.  Apart from the piles of souvenir rubbish still taking up shelf space, they took an extraordinary risk by producing and selling the official three-piece suit the English team have just sullenly traipsed back to England in.  I went into a London branch of M&S yesterday and saw the wretched item on a mannequin, ignored and unloved by all who passed it on the way down the escalator.  It’s a shame, it’s actually not that horrible a suit.  You know, I would probably wear one.  But even if they reduced the price of it by 75%, it’d still make me think I looked like Steven Gerrard or Wayne Rooney.  And, frankly, I don’t have that little self-respect.

Back at the Oxford Street tat stall in 2010, not much about tacky World Cup merchandise has changed.  But the vibe is different than 20 years ago – this time around, there’s no triumphalism in elimination, no sense of the national team having gone down fighting and suffering a glorious, tearful defeat.  It’s all embarrassment and bewilderment, finger-pointing and scapegoating.

This year, amongst the flags of other, better, footballing nations are knock-off replica England shirts.  You know, the red ones.  Up until Germany whupped them 4-1 last Sunday, The English had never been beaten in all-red.  Oh dear, oh dear, and of all the nations to do it.  Whatever happened to “Two World Wars, One World Cup?”, eh?  Perhaps ‘England Expected’ the Americans to join in late on in the second half to give them a dig out?

Looking closely at the synthesized badge on one of the knock-off red shirts, I observe three badly-drawn blue squiggles that bear no resemblance to the once-feared and vaguely respected Three Lions.  Even amongst shameless tat merchants, the embarrassment is in the details.