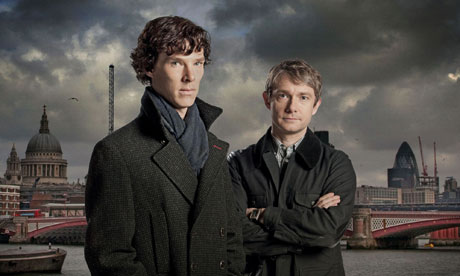 Benedict Cumberbatch sounds gloriously anachronistic, a name to do a little more than conjure with.  He should be a Dickensian cartoon character, if such a thing could possibly exist.  Crazy name, crazy face,  he must surely be a crazy guy.  How perfectly cast he is, then, as Sherlock, the latest TV incarnation of Arthur Conan Doyle’s Holmes, brought to BBC1 by Doctor Who writers Steven Moffat and Mark Gatiss.

It’s now set in 21st century London but, as soon as it gets the plot point of Dr John Watson’s (Martin Freeman) recent, troubled past in Afghanistan out of the way, ‘A Study In Pink’ proves remarkably true to the adventurous spirit of Conan Doyle’s original Holmes stories.  As Doctor Who fans already know, Moffat and Gatiss wouldn’t be involved unless they were huge fans of the source material, and would protect its legacy jealously.

London still looms large, and Moriarty is still out there, somewhere, but gone are the foggy streets, foggy notions and costumes of the old, if still wonderful, Basil Rathbone films.  About the only aspect pickled in time is 221b Baker Street, the homely but faintly gloomy house where Holmes lodges, under the maintenance of Mrs Hudson, played by the always wonderful Una Stubbs.

Cumberbatch is simply excellent as the eccentric, slightly sociopathic, obsessive Sherlock, his gloriously odd facial features adding a new dimension to accepted screen depictions Holmes’s unique methods of detection and hypotheses.  Volunteering to assist a baffled Inspector Lestrade to solve a mysterious string of linked suicides, he was a joy to watch as he danced down stairwells, leapt across Soho rooftops and observed crime scenes while his instant, silent deductions fluttered across our screens in text form.

Freeman was also fine in the role of Watson, but hats off to marvellous Mark Gatiss himself, in the role of Holmes’s ‘arch enemy’ – and one with a lovely twist in the tail.

Overall, this energetically-paced, thoroughly exciting and entertaining production was a world away from the sort of sub-Rathbone lightweight dramas we’ve come to expect in the years since the great Jeremy Brett last donned the deerstalker – productions which seemed paced more for fans of painfully gradual ITV detective dramas like Poirot, Midsomer Murders and Inspector Morse.  Sherlock already looks like a DVD keeper.

With a writing and production team like Moffat and Gatiss, Sherlock naturally invites comparisons to Doctor Who.  Indeed, Cumberbatch would be an obvious future Doctor – but Holmes has had more regenerations than the old Time Lord, and this one could well be the best incarnation yet.

4 thoughts on “Pipe down, it’s a no-shit Sherlock”