Due to overwhelming demand (and the extraordinary patronage of ANITA ALOHA , star of a 1960s Kellogg’s commercial), it seems we may have a ‘Bring Back Puffa Puffa Rice’ Campaign on our hands.  Personally, I’m all for keeping the past in the past but, if they can bring back Wispas, we could be in with a shout.  Firstly, here’s the ad featuring our friend Anita Aloha, followed by last year’s post as it appeared, then… 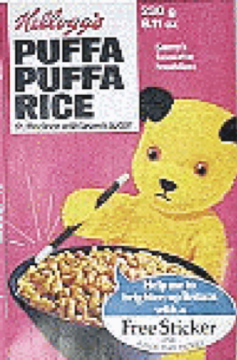 Generally speaking, I’m not one for nostalgia. Get a bunch of people of a certain vintage together in a living room or a bar and a strange mist descends over their eyes – before you know where you are, they’re dredging up half-memories of Spangles, Captain Pugwash, school medicals (including “the cold spoon”), Creamola Foam and Thalidomide.

Still, sometimes, a fleeting recollection of a certain product will conjure up tastes, smells and emotions of a bygone, never-to-return era; not a demand for an immediate return (because most comebacks don’t work), just remembrance of youth and a gentler time of your life.

And so to Kellogg’s Puffa Puffa Rice. This was a 1960s/70s staple which seemed to disappear all of a sudden, much to my sound and fury, in 1975. There were several box designs before my time but the last one I remember featured useless, mute glove puppet Sooty brandishing a magic wand. Coincidentally, his side-kick, the squeaking “dog” Sweep, featured on the box of “chocolate-flavoured” version, KoKo Crispies which, shortly after, became CoCo Pops.

Puffa Puffa Rice were light, sugar-coated pellets that went typically soggy and slimy in milk but provided morning after morning of pleasure for the fledgling me – even if they weren’t doing me any nutritional good whatsoever. All the same, one look at that old box can still bring a tear to my eye.

Also from this era were Golden Nuggets, an even more sugary cereal which became the subject of a long ‘bring-it-back’ campaign by old people with foggy hindsight faculties, even ending up in the lyrics of The All Seeing I’s 1st Man In Space in 1999. It appears that Nestlé were listening, as Golden Nuggets were relaunched shortly afterwards. And, of course, they turned out to be utterly revolting after all these years.